Illuminated By The Moon 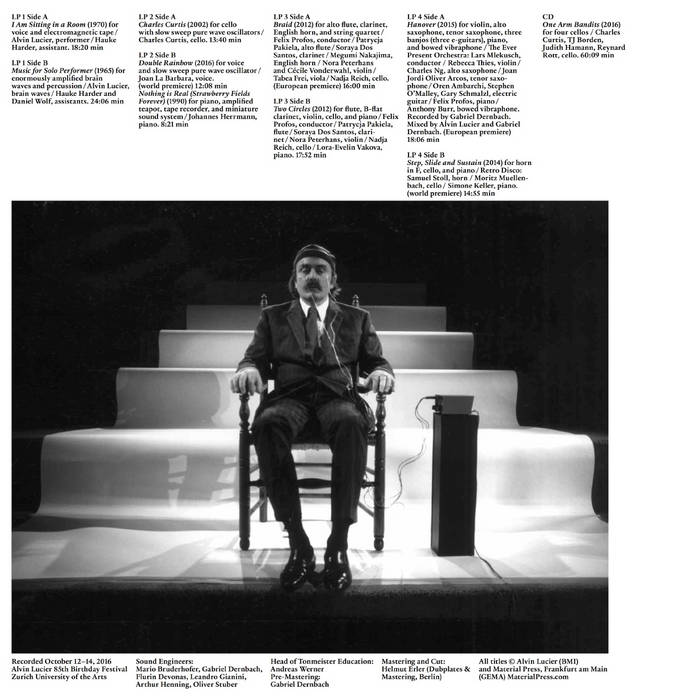 Black Truffle together with Bernhard Rietbrock and ZHDK are honoured to reissue this stunning boxset celebrating Alvin Lucier’s 85th birthday celebrations which took place in Zurich, 2013.

Alvin Lucier is one of most important figures in more than a half century of avant-garde and experimental sound practice. He has no equivalent. He is among America’s most important composers – a towering pillar of intellect, creativity, and beauty realized through sound. His singular and unparalleled body of work, focused around acoustic phenomena and auditory perception, which included, among many others, the groundbreaking works Bird And Person Dyning, Music On A Long Thin Wire, and I Am Sitting In A Room, each quietly shifting the understanding of what music could be – deceptively discrete gestures, laying their mark on history and the expectations of nearly everything to come, while radically expanding the field. It is such a life, defined by such striking accomplishment, which this release celebrates across the four LPs, CD, and book which make up the lavish Illuminated by the Moon release.

Recorded in October of 2016 at the Alvin Lucier 85th Birthday Festival at the Zurich University of the Arts, the box gathers a remarkable range of performances of works from Lucier’s life in music, from the iconic to the lesser known. It begins with wonderful stagings of I Am In A Sitting Room and Music For Solo Performer performed by the composer, before presenting the work Charles Curtis performed by the cellist for whom it was composed, and Double Rainbow, a recent work, performed by the incredible Joan La Barbara. Over the course of the set’s many discs, we encounter works ranging from Nothing Is Real (Strawberry Fields Forever), Braid, Two Circles, Hanover, Step, Slide And Sustain, and One Arm Bandits, performed by Oren Ambarchi, Stephen O’Malley, and Gary Schmalzl, with further contributions by Charles Curtis and many others involved in the celebrations of Lucier’s life and work. The collection, by offering an expanse of material otherwise unavailable in the composer’s discography, opens a rare window into the breadth and range of territory which he has approached, as well as into the unique humor which has quietly bubbled through his entire career. It is a singular recording event, the likes of which are unlikely to be repeated.

A worthy tribute to one of the last century’s most important composers, offering insight, recognition, and critical investigation, long overdue and lovingly produced. Including an extensive, lavish 120 page book, with numerous unseen images. Pressed on 180 gram vinyl, this limited edition of 500 individually numbered copies is unquestionably one of the most beautiful and important releases of 2018.