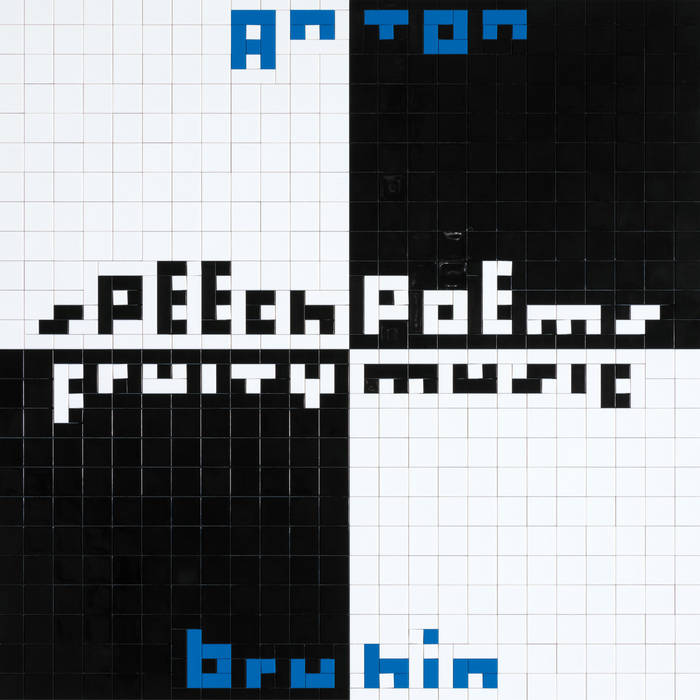 Black Truffle is delighted to offer up a rare serving of unheard works by legendary Swiss artist Anton Bruhin. Active as a visual artist, poet, and musician since the 1960s, Bruhin has created important work in forms as varied as concrete poetry and landscape painting, imbuing everything he does with wit, humility, and absurdist humour. A recognised master of the jew’s harp (or Trümpi, as this ancient folk instrument is known in Swiss German), Bruhin’s sound work also encompasses tape collage, sound poetry, and manipulated bird song.

On Speech Poems/Fruity Music we are treated to 26 short pieces made between 2006 and 2008 using the audio software Fruity Loops. These pieces carry on Bruhin’s long-running project of exploring the creative use and misuse of cheap, accessible technologies. In many of his analogue works, Bruhin explored the possibilities of simple cassette equipment. He invented DIY approaches to layering sounds by using multiple tape machines, experimented with distortion and tape speed, or, in his classic Inout (1981) created a maniacally single-minded audio monument to the pause button. Like the computer pixel drawings the artist produced around the same time as these recordings, Speech Poems/Fruity Music extends this approach to consumer software, presenting two parallel sequences of works that make use of Fruity Loops’ inbuilt synthetic instruments and its speech synthesis function. The instrumental works play like a twisted take on the aesthetics of 1980s video game soundtracks, using synthetic accordion and harpsichord sounds to realise jaunty little ditties that exploit their machine-realisation by making use of improbable pitch-bends and humanly impossible tempos and articulations.

Between these samples of Fruity Music, we are treated to the Speech Poems, a series of recitations by a lone computer-generated voice. Many of them are in fact songs, as the synthetic voice crudely and hilariously changes pitch as it moves through its fragmented syllables and odes to cream in coffee. Carrying on Bruhin’s interest in the creative misuse of technology, many of the Speech Poems attempt to force Fruity Loops’ voice synthesis, designed only to speak English, to speak German. By entering phonetic text into the program, Bruhin gets it to produce a passable German alphabet and a series of approximations to a proper pronunciation of his name.

Hilarious while strangely austere, entertaining but bizarre, Speech Poems/Fruity Music is classic Anton Bruhin, arriving in a beautiful mosaic cover by the artist, with the text of the ‘abc für anglophone’ on the back cover.